HELLO AGAIN!
Still here!  And looking forward to seeing you again soon.
PARK POTTERY will open again on April 26 YAY!
We survived the pandemic making tiles for large mosaic project here at Findhorn near the Phoenix cafe.  Photo as promised.
We are well stocked, having had to lockdown since Christmas, so come and enjoy many reductions and an incredible variety of styles and functions including mugs, candle holders, bowls, planters, vases as well as whimsical sculptures. 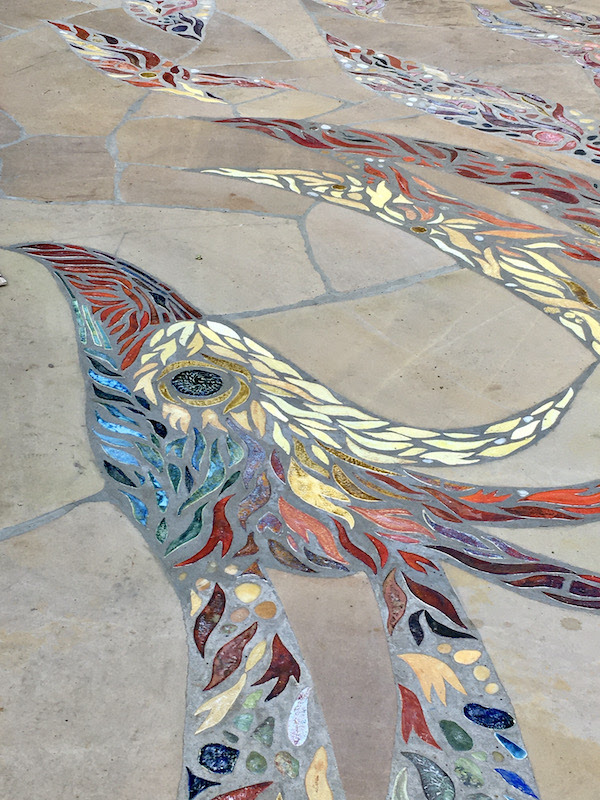 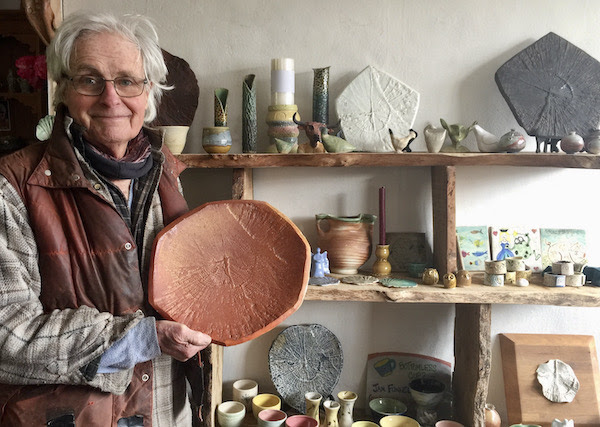 Craig Gibsone,  our Potter/Artist in Chief, has a unique design which is prevalent around the Findhorn Community, in the sanctuaries and private homes as well.  Here's Craig, his spirit plaques, and the story behind it.

"Just by accident I found a great big piece of oak with a really nice pattern to it, so I pressed a piece of clay into it and used it to make bird baths.  One day I saw the pattern was like a star with an eminence to it.  I played with it a little bit more &  it appeared like a human figure standing in the middle of the star.  That really inspired me! Since we humans first began, we started to make figures of some type of eminence, some type of radiant energy and of course all different religions call it different things.  Here at Findhorn they talk about the Cosmic Christ. This image could be interpreted as that radiant cosmic christ.  Then my buddhist & hindu background shifted the perspective to this eminent radiant pattern of humanity emerging out of the cosmos.  I made them androgynous in the beginning, and besides  the radiant masculine or divine feminine, whatever it wants to be.  I added little bits to accentuate the figure in the centre to be either masculine or feminine. It's an inspirational  image without any religious connotation other than what you want to place in it.  "Spiritual Rorschach". And if you don’t see anything in them that’s fine. Often I use them to make big bird baths. They are made in various clay bodies, sizes, some shaped as bowls, others mounted on wood to be hung. 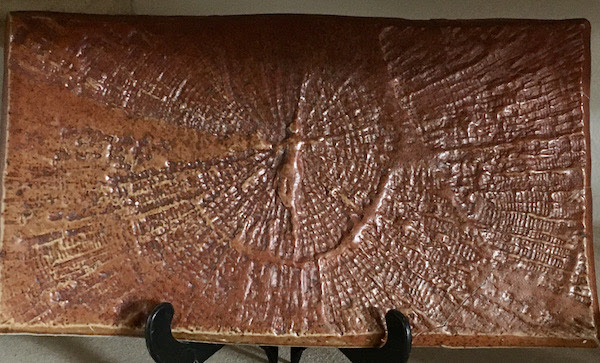 During the pandemic our team members worked at home, solo, experimenting with tiles to be painted and backed with cork as trivets as well as a series that could be a splash -back. Or making sculptures. Here are some examples to be explored in newsletters to come.

We will send another newsletter soon with details about studio sessions, hours, prices and more features about the working potters at Park Pottery.
Watch this space!